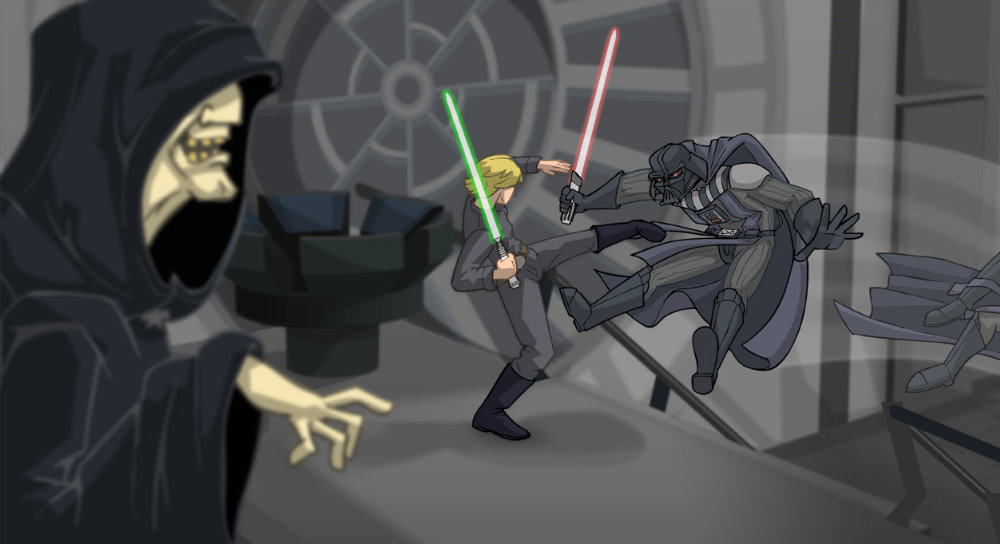 Between 1999 and 2009 Lightsabre.co.uk brought news, fanfic, podcasts and much, much more to the masses. Our one hundred and eighteenth guest is an artist for Lucasfilm, appearing at Star Wars Celebration – Spencer Brinkerhoff III. 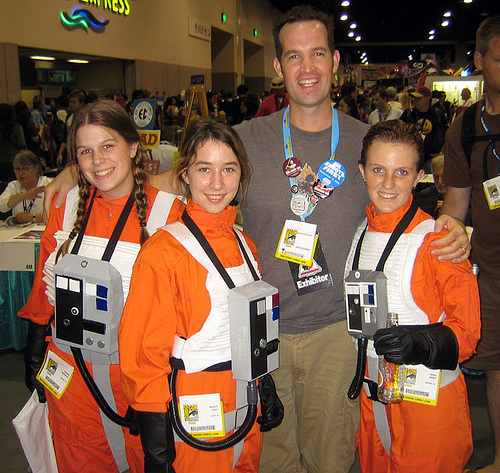 SB – Thank you, thanks for having me.

SB – It’s what I grew up on. My brother Steven and I had just about every Star Wars figure there was. We had the records, storybooks and even the wallpaper. We would dig holes in the backyard to make our own battles. We would dress up like the characters for Halloween. My Mom searched high and low to find that Luke Skywalker action figure.

Lightsabre – You have worked painting houses, faux finishing, sculpting, sketching, illustrating, making flash animations and graphics for e-learning courses. What valuable tips have you pick up along the way from those experiences that help with your current artwork? 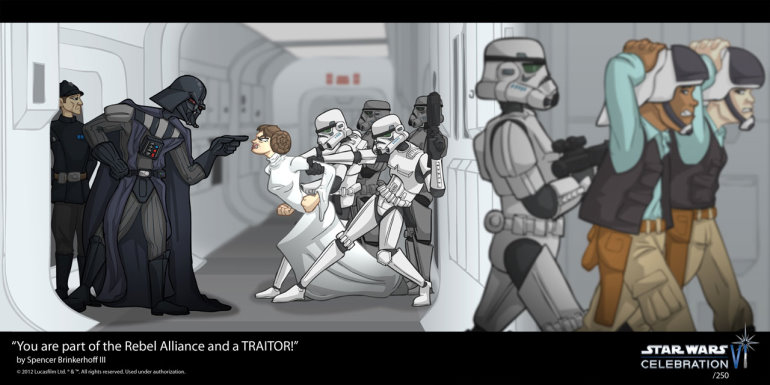 SB – I graduated from Arizona State University with a Fine Art degree majoring in New Media Concepts and Intermedia. I really don’t know what the jumble of words mean, so I just say I got an Eagle Scout Degree. In the same way that a Scout has to become a bit of an expert in many different disciplines to achieve the rank of Eagle, I had classes in watercolor, sculpture, film, video, digital photography and even a bit of dance to get my degree. This varied pattern of learning continued into my work career as I looked for something that suited me. I’d like to think that I’m continually learning new things that are preparing me to look for solutions to problems in a unique way.

Lightsabre – Which of the six episodes stands out as your favourite and why?

SB – A New Hope. After watching all the films and then going back to watch Episode IV again, I just love the way that Alec Guinness reacts to Lukes questions about the Clone Wars and Darth Vader and Luke’s father. I felt that he knew the whole story, and wasn’t able to share it yet. When I realized that there was more to the story that he wasn’t able to tell, I knew that there was a grand plan at work and this movie was laying the foundation for everything else to follow.

Lightsabre – Your artwork for Celebration Japan drew a lot of attention, and that was helped tremendously by the animation piece you did to accompany it. Could you tell us a bit about the concept and thoughts behind that, as well as how you actually executed it?

SB – Thank you. I had originally planned to do a piece of the trash compactor scene. Luke and Han in the stormtrooper armor, Leia and Chewie and even Diagona the Trash compactor monster. I was focusing on Episode IV because this year is the 30th anniversary of the movie opening in Japan. I was talking my friend about the concept and he suggested that I do the cantina scene. I couldn’t believe that I hadn’t thought of it before! I spent a bit of time re-watching the scene and the thinking about how Greedo should be posed. I searched online for a few reference images of Greedo and then I sat down in one evening with paper and pencil in had and drew Greedo. I was a bit surprised that I drew it perfect on the first try. That convinced me that I was on the right path. I put together a mock up of the scene and sent it in for approval and then I scanned it into the computer. Because I’ve been doing so much work with Flash animation, I used the program to do all of the digital ink and paint for the print and then layered it in Photoshop.

SB – I remember running down the stairs for Christmas morning and finding the AT-AT standing in front of a mountain of presents with the snowspeeder right beside it. I KNEW that Santa had read my mind and brought me that AT-AT. 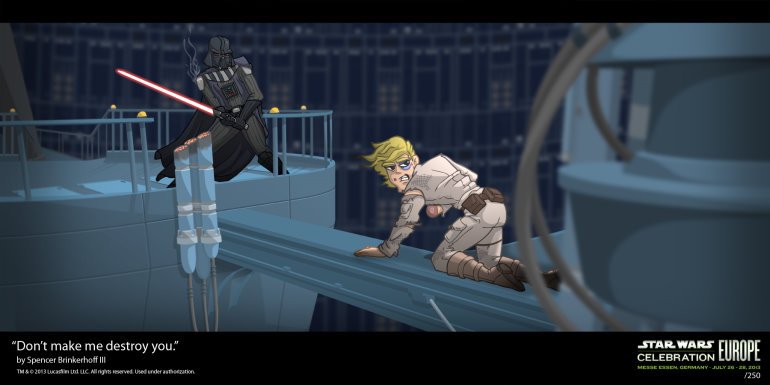 SB – Well, maybe I’m Episode IV Luke. To a certain degree I’m a know-nothing farmboy out experiencing the great big universe for the first time. I’ve got a wide-eyed optimism and sincere faith in the goodness of people. 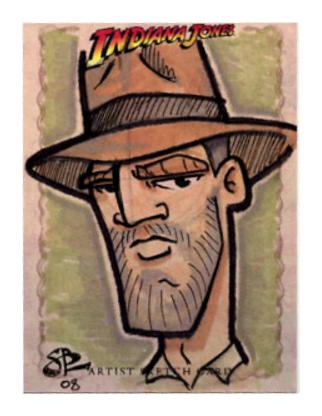 Lightsabre – Lightsabre were lucky enough to be at Celebration Europe last year and had the pleasure of hanging out with some of the artist crowd on the evening. How much fun is it to be a part of that gang, meeting up at conventions and generally raising hell?

SB – Hehehe. I went to the San Diego ComicCon for the first time in 2006. I didn’t know a soul there and while I enjoyed everything I was worn out and ready to go home. I decided that I needed to meet more people and make more contacts so that the trip would be more worthwhile.

Lightsabre – What interests do you have outside of Star Wars? I imagine your kids must take up a lot of your free time?

SB – I like to tell stories. I’ve shot some videos and drawn some of my own characters. I love to make costumes for my kids and sometimes for myself. I like the way that the internet allows for such creative freedoms. Kids do take up a bit of time, but I wouldn’t have it any other way. 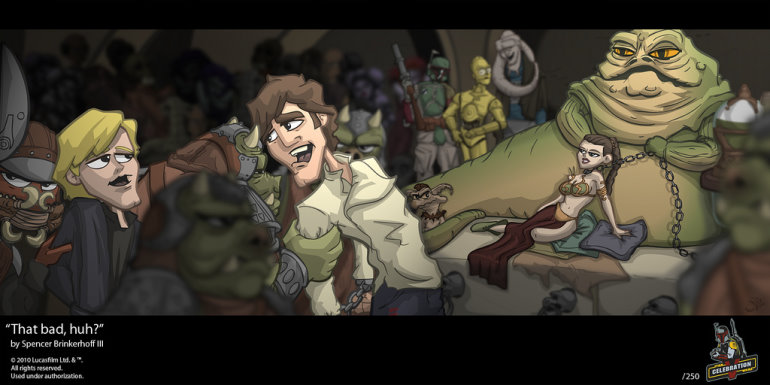 Lightsabre – You’ve drawn for The Clone Wars trading card set, so have already had an involvement in the show, but what are your hopes for the show as it progresses and what would you like to see?

SB – I’m looking forward to the various stories that can be told in the Clone Wars. I’m interested to learn more about Count Dooku and his reasons for leaving the Jedi Order. 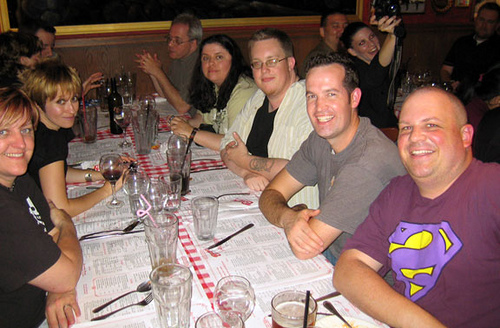 Lightsabre – Over the past few months you’ve become a name that Star Wars fans recognise and welcome. What project in the Lucas universe would you like to tackle next?

SB – Thank you for saying that. I’ve been drawing and dreaming for years, but it wasn’t until I got an invitation to draw some of the sketch cards that any of this has happened and that was just in December of last year. I’m flattered to think that in 7 months that I have become a recognized Star Wars name. With the animation studios in full swing and the announcement of the return of the StarWars.com webstrips, I would like to see some of those webstips animated. I think that would be the big Lucasfilm project that I would want to take on.

SB – I like the site and the information. It’s a good place to keep up to date. I’m always lurking around the site. I do wish that the scroll box with the content in it was a bit larger, maybe I need to get my eyes checked.

Lightsabre – It’s been a great interview, and thanks for being our guest on Lightsabre. Just one final question. Leah Mangue, Cynthia Cummens and yourself are at a very exclusive dinner party, hosted by George Lucas. Randy Martinez has dared the three of you to put rabbit ears up behind Lucas’ head for everyone to see – everyone apart from Lucas himself. Which of the three of you manages to pull it off first and how?

SB – It would have to be me of course. Leah would be too busy posing with Ron Perlman and Bruce Campbell. Cynthia has this sixth sense where she knows when a camera flash is about to go off so she can flash that million dollar smile. So all of the camera flashing would distract her. Then I would walk up and talk about Celebration Japan and how interesting it is that all of the Japanese pose for photos and flash the peace sign. I would ask for a photo and the give him the peace sign/bunny ears bait and switch! 😀