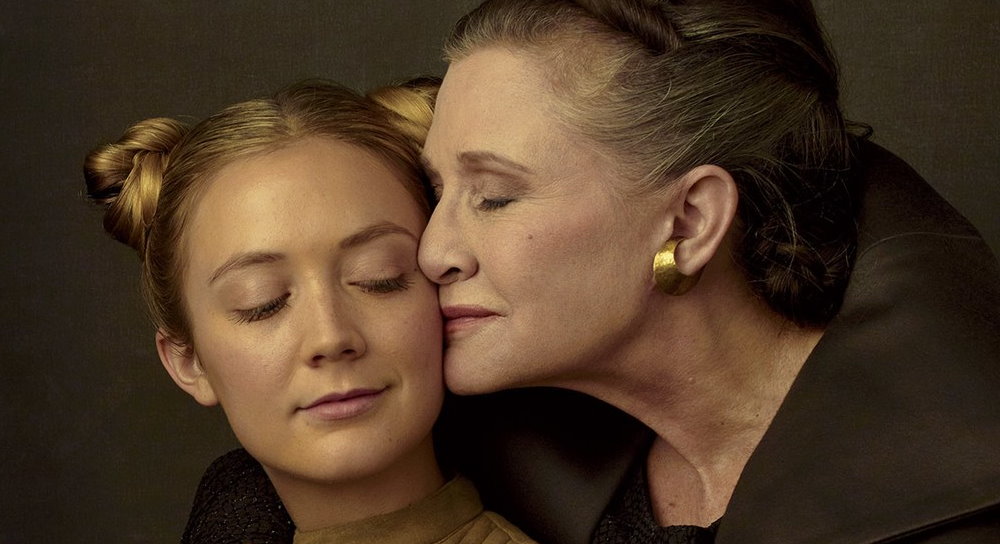 In what context General Leia appears in The Rise Of Skywalker is still unknown but today in a preview of Vanity Fair’s latest Star Wars coverage, an article was dedicated to Carrie Fisher’s appearance and the decision process for J.J. Abrams and her daughter Billie Lourd.

When The Rise of Skywalker director J.J. Abrams figured out how to include the late Carrie Fisher in the final installment of the Skywalker saga, he felt he “suddenly had found the impossible answer to the impossible question.” Painstakingly stitching cut scenes from The Force Awakens into this new Star Wars installment, Abrams could bring out an entire performance from Fisher as General Leia—allowing her to live again on-screen in a way that, Abrams hoped, would be a comfort for her fans.

Abrams had made a conscious decision not to include Lourd in scenes with her mother however he explains;

“I purposely had written her character in scenes without Carrie, because I just didn’t want it to be uncomfortable for her,” Abrams says. Instead, he recalls, Lourd told him, “I want to be in scenes with her. I want it for my children when I have kids. I want them to see.”

With this final movie meant to be Leia centric, how could this happen now? It’s unsure how much General Leia will feature in this film, but it’s clear from the article her appearance will not be an add on and will be an integral part of the plot.

The Rise of Skywalker team wrote scenes around the existing Fisher footage, and shot other angles, matched lighting, and put together a finished product “as if we were doing a re-shoot and doing someone’s side, which happens all the time.”

Due to this careful digital patchwork that nonetheless leaves Fisher’s full human performance untouched, Leia’s integration into the film is so complete, she physically interacts with some of the other characters in The Rise of Skywalker. The film’s teaser reveals Leia tenderly embracing Daisy Ridley’s Rey. “You see it in that scene with her hugging,” Abrams says. “And it’s like she gets to be in this movie where we would have wanted this moment.”

One can only imagine how hard it must have been for Billie Lourd and at times J.J. explains it was a challenge.

Abrams says there are also moments in the film in which we’ll see Fisher’s Leia and Lourd’s Lt. Connix talking and touching as well. In some instances, Abrams says, Lourd became overwhelmed during filming. “She would get emotional and sort of have to excuse herself for a minute,” he recalls. “I know it was hard for her for a while.

The article mentions the cameo of Leia in Rogue One and confirms that digitalisation of General Leia in The Rise Of Skywalker does happen but it is more in the editing.

As a result, Abrams and Lucasfilm are particularly sensitive that the digital artistry involved in incorporating Leia into The Rise of Skywalker not distract from what will likely be Fisher’s final on-screen performance. “I hope when people see it, they are not thinking about that,” Abrams says. “Of course, some will, but I think it’s one of those things. It sort of goes away after a moment, because it’s not quite a magic trick; it’s sort of more of a trick of editing.”

Is there a hint to General Leia’s appearance as a Force ghost as well?

It does seem fitting for this version of Fisher to return to a franchise already populated with Force ghosts like Obi-Wan, Anakin, and Yoda, who appear to impart wisdom and emotional closure to the next generation. “There is an element of the uncanny, spiritual, you know,” Abrams says. “Classic Carrie, that it would have happened this way, because somehow it worked. And I never thought it would.”

Until we see The Rise Of Skywalker in cinemas during December all we can do for now is try to examine every piece of information out there and wait and see!

This and more Star Wars will be in the summer issue of Vanity Fair on newsstands in New York and Los Angeles on May 30th, and nationally in the US on June 4th.